Soundset is a musical project aiming to translate visual art into electronic music. The project is organised by The Museum of Fine Arts, Ghent (Belgium).

Participants are invited to find a sound which connects them personally with a piece of art from the running exhibition “Modernism, Belgium abstract art in Europe”. Now doesn’t that sound a bit what Music For Installations is trying to do? We are happy to be invited into the project that is open for beginners as for advanced people. During the weekend of the 27th/28th of April 2013 you can find MFI back into the exhibition working on a new soundscape.

On april 30th there is a special ‘nocturne’ where the music is presented, followed by an afterparty. 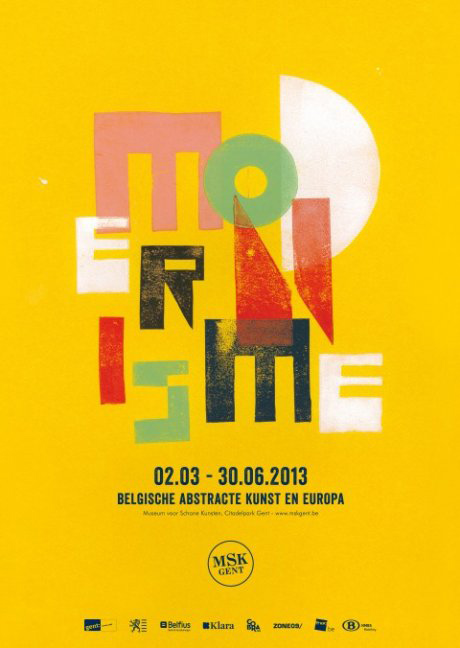 About the exposition Modernism: “In this first major retrospective exhibition of Belgian modernism around 1920 for more than twenty years, Belgium’s historical avant-garde will be illustrated through visual and applied art, architecture, typography, photography, films, music, literature and theatre. Belgian protagonists like Marthe Donas, Jozef Peeters, Jules Schmalzigaug, Victor Servranckx and Georges Vantongerloo will be juxtaposed with foreign contemporaries like László Moholy-Nagy, Vassily Kandinsky, Fernand Léger, Kurt Schwitters and Theo Van Doesburg. A number of large international museums are loaning works for this exhibition.”

International exhibitions shortly after World War I brought international avant-garde into the picture in Belgium. Local artists had contact with international artists and the scene went to its highlight in the period 1920-1925. The exhibtion follows the development of key artists like Karel Maes, René Magritte, Jozef Peeters, Victor Servranckx en Georges Vantongerloo, and searches for influences and similarities with the international scene, like The Style, Bauhaus, Russian constructivism, post-kubism. The exhibition also follows the other art forms, like movie, music and architecture.

(images property of the The Museum of Fine Arts, Ghent)

Video from the perfomance ‘Modernism’, taken at the Nocturne itself, in the Museum for Fine Arts, Ghent.